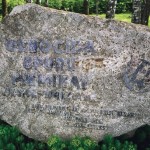 In July 1941, after the Nazi Germany troops had entered Viesīte, approximately 150 Jews who lived in Viesīte were driven out of their homes and placed in a shed at “Ļudāni” farm (4 km from Viesīte). On 19 July, the local self–defence unit murdered the arrested Jews in a forest behind a swamp, in a distance of approximately 1 km from “Ļudāni” farm.

In 1958 the remains of murdered Viesīte’s Jews were reinterred in the Jēkabpils Old Jewish Cemetery, where a monument was erected in 1988. A memorial stone to Jews in Viesīte was unveiled on 5 September 1998, at the Jaunie Cemetery, with the words by poet Knuts Skujenieks carved into it: “Commemorate us with a moment of silence not because of us, but because of you.”