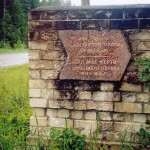 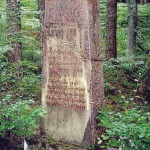 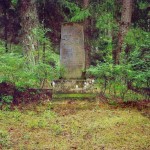 In July 1941 in the forest of Vecmokas District the local self–defenders killed a number of Jews from Tukums – representatives of the local intelligentsia (doctors, public figures, etc.), who were accused of supporting the Soviet power.

After the war a memorial stone was erected on the site of murder with an inscription in Latvian and in Russian. A sign, carved in wall, on the roadside points to the memorial place.