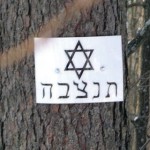 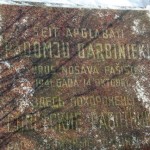 The German army entered Jelgava on 29 June 1941, and already at the end of July practically all Jews of Jelgava were murdered on the shooting–range of the former 3rd Jelgava Infantry Regiment of the Latvian Army. On 2 September 1941 45 mentally ill Jews and doctor H. Idelsohn were taken out of the Jelgava Psychiatric Hospital. They, together with Soviet activists, were murdered behind the Nikolai Cemetery.

On the site of the murder a common monument has been erected on the mass grave with an inscription in Latvian and in Russian “Here Soviet officials, who were shot by fascists on 14 October 1941, are buried”. A symbolic sign with the Star of David has also been placed on a tree at the site of murder. The remains of Jewish victims were later reinterred in the Brethren Cemetery of Jelgava.