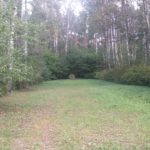 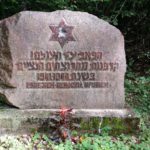 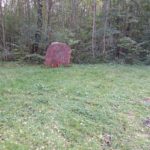 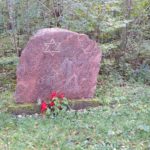 The German army entered Jelgava on 29 June 1941, and already on the following day arrests of Jews began. On 3 July the Great Synagogue of Jelgava was burnt down, with a number of Jews and Rabbi Leon Owtschinsky inside. At the same time restricting orders were issued, providing that Jews had to resettle on the outskirts of the city. The eradication action took place in the second half of July 1941, at the shooting–range of the former 3rd Jelgava Infantry Regiment of the Latvian Army. The killing was lead by Sturmführer A. Beck of the German SD unit (Einzatzgrupe), sent from Riga, together with the Latvian auxiliary police.

Two monuments are located on the site of murder. One of these was erected in 1992 (sculptors O. and E. Saksons), with the Star of David on it and an inscription in Latvian and in Hebrew “1941–1944. To Jews – Victims of Genocide.” The second monument has an engraved Star of David with no inscription.