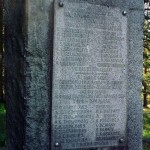 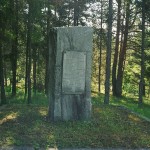 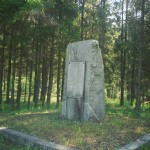 The German army occupied Ilūkste at the end of June 1941. Arrests of Jews began in mid–July, and soon afterwards, in the course of three actions, “self–defenders” of Ilūkste shot 60 Jews of Ilūkste and 30 Jewish refugees from Lithuania at the Jewish Cemetery. Possibly, also the Jews from Bebrene parish were shot at the Ilūkste Jewish Cemetery. Some Jews of Ilūkste, who were engaged in agriculture, were sent to the Daugavpils ghetto.

During the Soviet period at the site of shooting, in the former Jewish Cemetery a monument was erected with an inscription in Russian and Latvian: “Eternal remembrance to the Soviet citizens, who fell at the hands of German fascist occupants during the years when the Latvian SSR was occupied, in 1941–1945”, and a list of many surnames, with no Jews among them, it is only added “and many others”.