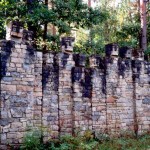 In July 1941, after the German army entered Bauska, the Jews of Bauska were driven out of the city centre to the outskirts, where a provisional Jewish ghetto was formed. In the beginning of August Jews were arrested and placed in the building and the yard of the former School of Trade and Commerce, which was situated within the territory of the provisional ghetto. After that transporting of Jews to the Likverteni Forest of Vecsaule parish was organised, where the Latvian SD unit “Arājs’ Commando”, which had arrived from Rīga, within a couple of hours shot 500–600 Jews. Approximately 150–200 Jews from Skaistkalne and from other parishes of Bauska district and approximately 50–70 Jews from Jaunjelgava were also brought to the Likverteni Forest, where they were shot by “Arājs’ Commando”.

In 1971 a monument in dolomite “Human Figures” (sculptor Imants Murovskis) was erected on the site of massacre. A plaque has been placed on the base of the monument with an inscription in Latvian “Eternal memory to those Soviet citizens, who in 1941 were killed by German –Nazi occupants and their accomplices bourgeois nationalists.”