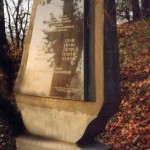 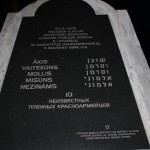 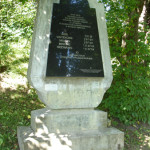 The Nazi forces occupied Bauska on 28 June 1941. Already on 2 July, pursuant to the order by the German military commander, on the right bank of the Mēmele River near the Old Jewish Cemetery “an intimidation” action was organised, during which 20 hostages, 5 Jews from Bauska among them, were shot by German soldiers for fictitious crimes.

During the Soviet period on the side of the Old Jewish Cemetery at the bridge over the Mēmele River a concrete monument was erected with the inscription “Eternal glory to deceased heroes for liberating our motherland in 1944–1945.” Later these words were covered by a screwed–on bronze plaque stating “To the Victims of Fascists’ Terror”. In the 1990s this plaque was stolen by people gathering non–ferrous scrap metal. In 2004 the Council of Jewish Communities of Latvia erected a new plaque in granite with inscriptions in Latvian and Russian, as well as the names of deceased Jews in Hebrew.