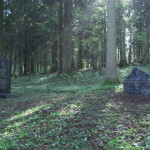 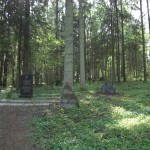 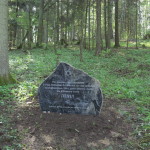 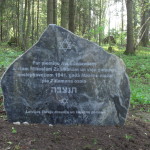 On 5–6 July 1941 a decree was issued providing that the Jews of Auce had to move to the outskirts of the town. However, in a couple of days arrests followed and the local self–defenders imprisoned all Jews in a brick shed near the Vecauce Castle. On 11 July a German SD unit arrived from Jelgava, which together with the local self–defenders conducted mass shooting of the imprisoned Jews in the Putnu Forest (approximately 4 km from Auce).

In 2003 the Council of Jewish Communities of Latvia erected a monument on the site of massacre. An inscription in Hebrew, Latvian and in English is engraved on the monument: “Here on July 11th, 1941 Nazi occupants and their accomplices murdered around one hundred people from Auce only because they were Jews. Remember to never let that crime happen again!”. Lord Greville Janner, representatives of Auce Municipality Administration and the Council of Jewish Communities of Latvia spoke at the unveiling of the monument. In 2008 one more memorial stone was placed next to the monument – to commemorate the family of the shot doctor M. Salimann (Zaliman), which was murdered separately in the Mazēnu Forest, because the family was temporarily staying in Sniķere parish.