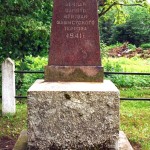 Arrests of Aknīste Jews began in mid–July 1941. For a couple of days Jews (150–170 in total) were imprisoned in the hall of hotel “Austrija”. Part of the prisoners were murdered in the hotel yard on 18 July by the self–defence unit of Ilūkste; the other part was taken to the outskirts of the town – the end of Jaunā Street – and shot there.

During the Soviet period, upon the initiative of the chairman of Aknīste Executive Committee, Hone Halsmann, a Jew from Aknīste who had survived, the victims were reinterred close to the Aknīste Cemetery. The memorial site was fenced off by a fence and concrete posts, topped by the Stars of David (later these were covered up). The inscription on the monument in Russian states: “Eternal Remembrance to the Victims of Fascistic Terror 1941.” The family of Leyb Feldhuhn, who lived in “Ganības” farm of Asare parish and was killed by “self–defenders” from Ilūkste in July 1941, is also reinterred here.