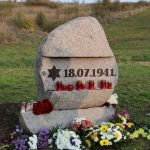 Arrests of Aknīste Jews began in mid–July 1941. For a couple of days Jews (150–170 in total) were imprisoned in the hall of hotel “Austrija”. Part of the prisoners were murdered in the hotel yard on 18 July by the self–defence unit of Ilūkste; the other part was taken to the outskirts of the town – the end of Jaunā Street – and shot there.

In October 2020 the memorial stone was inaugurated for Akniste Jews killed there in 1941 at the end of Jaunā Street.