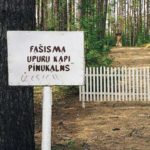 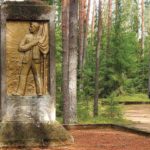 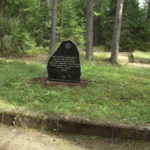 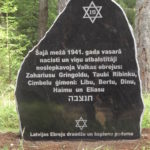 When the Nazi troops entered Valka on 8 July 1941, the majority of the town’s Jews had managed to evacuate. Exact information about the course of Holocaust in Valka is unavailable. It is known that remaining Jews had been shot at Pinukalns.

During the Soviet period a monument without any inscriptions was erected on the site of the massacre. In 2008 the Council of Jewish Communities of Latvia erected a memorial stone not far from the monument of the Soviet period, it bears an inscription in Latvian: “In this forest in 1941 Nazis and their supporters murdered Jews of Valka: Zacharius Gringold, Taube Ribink, the Zimbels: Leiba, Bertha, Dinah, Chaim and Elias”.