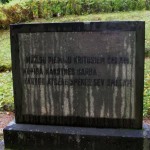 When the Nazi troops entered Smiltene at the beginning of July 1941, anti–Jewish actions started – the prayer house was burnt down, a group of Smiltene Jews had to do forced labour, others were put in prison. Mass murder of Jews took place at the beginning of August 1941, when the local self–defenders took them to the Dranga River and under the guidance of a German SD unit shot them (approximately 200 Jews in total).

In 1947 the remains of Smiltene Jews were reinterred in the Smiltene Meža Cemetery and a monument was erected, its inscription in Latvian states: “Eternal remembrance to those fallen we build. In common work for the future, we find strength in remembrance of heroes!”