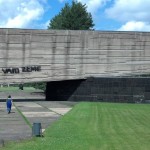 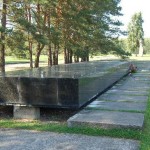 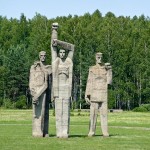 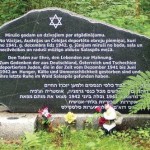 Location of the Memorial:

Construction of the Salaspils concentration camp began in October 1941. Approximately 1800 Jews of the German Reich were involved in construction work, of which 1000 died due to poor work and living conditions. Initially the camp was intended for placing Jews from Europe, but after its completion in 1942 it was used as a transit camp and labour camp, mostly for non–Jewish prisoners. The exact number of victims is not known: most recent studies show that 1162–1952 persons died in Salaspils concentration camp, among them – 50–100 Jews from Latvia.

In 1967 on the site of the Salaspils concentration camp an immense memorial was opened (architects Gunārs Asaris, Ivars Strautmanis, Oļģerts Ostenbergs, Oļegs Zakamennijs). In 2004, thanks to a donation by Larry Pik, a former prisoner at the Salaspils concentration camp, a separate monument to commemorate foreign Jews who died there was erected. The monument bears the Star of David and an inscription in Hebrew, Latvian and German: “To honour the dead and as a warning to the living. In memory of the Jews deported from Germany, Austria and Czechia, who from December 1941 to June 1942 died from hunger, cold and inhumanity and have found eternal rest in the Salaspils forest”.