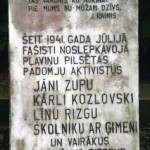 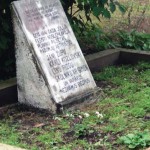 When the Nazi troops entered Pļaviņas at the beginning of July 1941, all Jews of the town together with Soviet activists (approximately 30–40 persons in total) were arrested and placed in the local liqueur factory. In the following days Jews were gradually taken and shot at the municipal Bārukalns Cemetery.

During the Soviet period on the site of murder in the Bārukalns Cemetery a monument was erected, it bears the lines by poet J. Rainis “That green tree that you broke, / That heroes that you slaughtered – / Eternally alive with us ” and an inscription in Latvian: “Here in July 1941 fascists murdered Soviet activists of Pļaviņas town – Jānis Zupa, Kārlis Kozlovksis, Ļina Rizga, Šķoļņiks with family, and a number of unknown comrades; “a number of unknown comrades” was used to designate Jews.