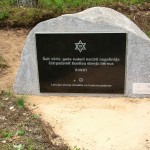 The arrests of Jews in Gostiņi started at the beginning of July 1941. All 300 arrested Jews were placed in a provisional ghetto – in a block in Gostiņi in the region of Lielā Street next to the bridge across the Aiviekste River, from where a part of those Jews, who were capable to work, were taken to work in rural farms or to Pļaviņas to clear up the devastation of war. On 1 August 1941 (according to other data – on 31 July) all Jews were convoyed to the Kaķīši Peat Swamp (approximately 5–6 km from Krustpils), where a SD unit (“Arājs’ Commando”), which had arrived from Riga, together with local self–defenders and policemen shot them.

In the autumn of 1941 on the edge of the Gostiņi Jewish Cemetery Jewish teenagers, who in the summer of 1941 had been taken from the ghetto to work as cattle herds in farms, were shot separately. Their remains were discovered only in 2005, when restoration work was done in the Cemetery. In 2006 the Council of Jewish Communities of Latvia placed on this site a black granite plaque with an inscription in Latvian: “Here in the autumn of 1941 Nazis killed fourteen Jewish children of Gostiņi”.