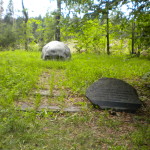 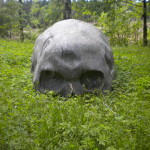 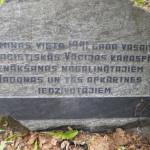 When the Nazi troops entered Madona in the first half of July 1941, arrests of Jews began. The arrested Jews of Madona were placed on the outskirts of the city in a bordered–off block between Rīga, Oskars Kalpaks and Avotu Street. At the end of July the arrested Jews of Lubāna were also placed there. On 8 August all arrested Jews were convoyed to the Smecere Forest (approximately 1 km from Madona), where a Latvian SD unit (“Arājs’ Commando”), assisted by local self–defenders, shot them (approximately 250 Jews in total).

After the war surviving Jews fenced off the place in the Smecere Forest by a pole fence and in 1960 erected a monument with an inscription in Russian and Latvian, with a message about Soviet people, who had been killed by German occupants and bourgeois nationalists. The monument has not been preserved to the present. In 1993 a new monument in granite in the shape of a human skull (sculptor Gvido Buls) was erected, in 2006 a small stone was placed next to it with an inscription in Latvian “Memorial place of the residents of Madona and its vicinity, who were killed after the invasion by Nazi German army”.