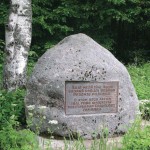 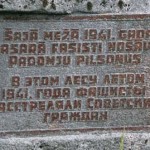 In 1982, not far from the site of murder in the Vilbaki Pine Forest, at the highway a boulder with a granite plaque was placed, it bears an inscription in Latvian and in Russian: “In this forest in the summer of 1941 fascist shot Soviet citizens”.