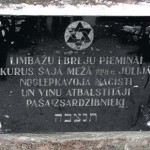 At the cross–roads “Zaļie Stabiņi”, not far from (approximately 1 km) the site of murder in the forest of Nabe parish, thanks to demands by the survived Jews, the local authority placed a small boulder with a memorial plaque with an inscription that Soviet patriots had been killed in this place. In the 1990s the plaque disappeared. In February 2005 the Council of Jewish Communities of Latvia placed a new plaque with the image of the Star of David and an inscription in Latvian “To commemorate the Jews of Limbaži, who were murdered in this forest in July 1941 by Nazis and the local self–defenders supporting them”.