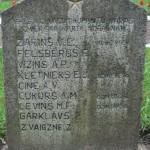 The Nazi troops occupied Limbaži on 10 July 1941; however, already a couple of days before that, on 5 July, a group of local self–defenders had appeared, which started arresting and humiliating Jews, as well as shooting Soviet activists – among them also three Jews were killed not far from the Lielezers Lake. Mass murders of Jews began in the second half of July and were conducted in accordance with orders given by German authorities, received from Valmiera. The first action took place in the forest of Nabe parish (approximately 10 km from Limbaži), during which 60–70 Jews of the town were shot. 30 more Jews from Limbaži were murdered around 20 July in a forest of Umurga parish (approximately 2 km from Limbaži), but around 12 September, when field labour ended, near the gravel pits of the Aģe River Limbaži policemen shot the remaining 10–12 Jews of Limbaži, who before that had been taken to the country house of a Lutheran minister in Vidriži parish. A few of the arrested Jews of Limbaži, possibly, in the second half of July were taken to Valmiera together with Soviet activists.

After the war the Jews shot at the Lielezers Lake – Nison Faiv Lewin, Wulfs Leyb Lewin and Lazar Kainer – together with Soviet activists, who also had been shot, were reinterred in Ķezberkalns, where a cemetery of Soviet soldiers, who were killed during World War II, was made. In 1960 a memorial sign was erected, it has an inscription in Latvian: “In eternal remembrance of the Soviet citizens, who in 1941 were murdered by fascist invaders and their supporters local bourgeois nationalists.”