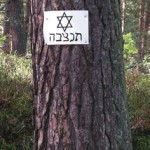 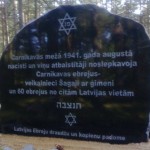 Exact information about the events of the Holocaust in Carnikava is not available. According to some testimonies, in August of 1941 30–80 Jews and several war prisoners were shot in Carnikava, in a forest not far from the farm “Blusas”.

On the site of murder the Council of Jewish Communities of Latvia placed a symbolic sign with the Star of David on one of the pines, but in 2008, on the edge of the forest, a monument in black granite with two Stars of David and an inscription in Latvian: “In Carnikava forest in August 1941 Nazis and their supporters murdered Jews from Carnikava – shop–keeper Schagal with her family and 60 Jews from other places in Latvia”.