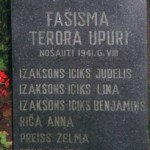 Exact data about the course of the Holocaust in Mālpils are not available. It is known that the Jews of Mālpils were shot in August 1941, in Stīveri, Allaži parish.

After the war, in the 1950s, thanks to the victims’ relative, the chairperson of the Council of Babīte village Ida Ulasa, the 11 Jews of Mālpils that had been shot were reinterred in the Pinķi graveyard. A monument was erected at the site of reinterment with the names and surnames of 7 persons and an inscription in Latvian “Victims of Fascist Terror. Shot in August 1941.”