Riga, the New Jewish Cemetery, Monument to the Jews of Dobele 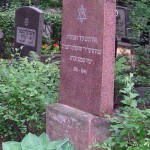 At the beginning of July 1941, upon the instruction by the Nazi Government, the Jews of Dobele were ordered to leave their homes and move to the premises of Dobele old primary school. After a couple of days the Jews were taken from the school to the Lielbērze Forest, where a German SD unit, which had arrived from Jelgava, assisted by members of the local self–defence groups, carried out an eradication action. At the same time also the Jews that had been arrested and brought from Annenieki parish of Tukums region were shot in the forest. According to the data of the State Extraordinary Commission, 49 Jews were shot in the forest.

In 1950 the surviving Jews of Dobele reinterred the remains of Jews, who had been murdered in the Lielbērze Forest, in Rīga, in the New Jewish Cemetery, erecting a monument in red granite with an inscription in Hebrew: “To the Jews of Dobele City, who were brutally murdered by the Nazis, whose names be erased. 1941 – 1944.”