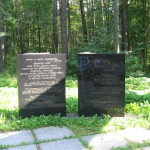 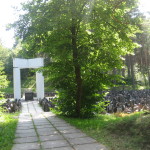 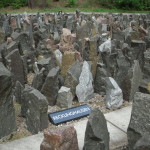 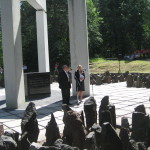 The largest mass murder site of the Nazi terror victims in Latvia is located in the Biķernieki Forest. In the period from 1941 to 1944, in a number of actions more than 35 000 persons were murdered here, of which approximately 20 000 were Latvian, German, Austrian, and Czech Jews.

In 2001 a memorial to all victims of Nazism was unveiled in the Biķernieki Forest, with the support of Volksbund Deutsche Kriegsgräberfürsorge, the National Fund of the Republic of Austria, the Government of Germany and several German municipalities (design author – architect Sergey Rizh). A symbolic altar is placed in the centre of the memorial – a black granite cube with an inscription from the Book of Job: “O earth, cover not my blood, and let my cry find no resting place!”, but the numerous granite stones placed around it serve as a reference to a traditional Jewish cemetery. Stone plaques with the names of European cities – places of residence of Jews murdered in the forest – have been placed in the territory of the memorial, symbols designating various groups of victims have been carved into these – the Star of David, a wreath of thorns, and a cross.