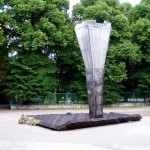 Construction of the concentration camp “Kaiserwald” (the historical name of “Mežaparks) started pursuant to the order issued on 21 July 1943 by H. Himmler, the Reichsführer of the SS, on the liquidation of all ghettos existing in Eastern Europe and transporting all Jews, who were capable of work, to concentration camps. By November 1943 the last residents of the Riga Ghetto (the local ones and those deported from other countries), as well as Jews from the liquidated ghettos of Liepāja and Daugavpils were placed in “Kaiserwald” camp. Later Jews from Lithuania, Czechoslovakia, Germany and Hungary were also brought here. The concentration camp functioned rather as a “registration centre”, from where the imprisoned Jews were allocated to other branches of the camp (there were more than ten branches – in Ķīpsala, Mīlgrāvis, Strazdumuiža, etc.) or labour camps (also in Lithuania, Germany, etc.)

During the post–war years standard residential buildings were built on the former territory of the concentration camp. On 29 June 2005 a monument was unveiled in this place. Sculptor Solveiga Vasiļjeva is the author of the monument.