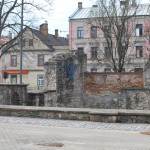 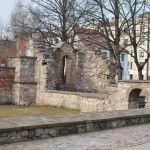 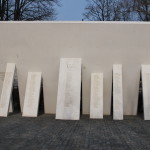 On 4 July 1941, as the result of an action organised by the Nazis, the Great Choral Synagogue at 25 Gogoļa Street was burnt down; at the time of burning many Jews were inside it (possibly, among them also Lithuanian Jews). The exact number of Jews, who perished in the synagogue, is not known.

After World War II the ruins of the synagogue were demolished and replaced by a square. In 1988 a memorial stone with the Star of David was placed here, but in 1993 – a memorial was unveiled (architect Sergey Rizh). The memorial consists of symbolic walls of the synagogue, with built–in original ornamental elements, found during excavations.

In 2007 a monument to Žanis Lipke and all Latvian saviours of Jews was erected next to the memorial. The monument consists a 12 metres long and 6 metres high wall, which is almost falling, threatening to destroy the Jewish people, and supports – columns with the names of 20 saviours of Jews. Žanis Lipke, who managed to save more than 50 people, is portrayed on the central column. A quote from the Book of Isaiah is carved on the left side of the monument: “I will give them an everlasting name that will endure for ever” (56:5). The monument was designed by Elīna Lazdiņa, a student of the Art Academy of Latvia.

At the beginning of the 1990s, the date when the synagogue was burnt, became the official commemoration day to the Holocaust victims in Latvia.