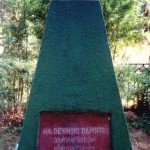 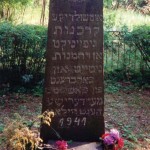 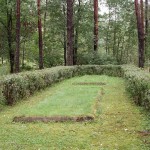 Upon the arrival of Nazi troops in Viļāni on 3 July 1941 all Jews had to move to a provisional ghetto on the outskirts of the town. At the end of July all Jews were arrested and taken to the school’s premises. On 4 August a SD unit (“Arājs’ Commando”) with the assistance of local self–defenders and policemen began mass murders – convoyed Jews to the forest behind the Russian Cemetery and shot them (approximately 448 Jews in total). The Jews from the vicinity were shot together with the Jews from Viļāni.

Immediately after the war the site of murder was fenced off with a pole fence. In the 1950s it was replaced with a metal fence, and a green obelisk was erected with an inscription in Russian “Eternal remembrance of those who were tortured to death by fascists August 4 1941”. In the 1960s relatives of murdered Jews erected one more document – a stele in red granite with a menorah and an inscription in Yiddish “To innocent victims, who were tortured to death by the hands of ruthless fascists, killed and burned. Viļāni, 1941.”

Every year on the first Sunday of August a ceremony to commemorate the deceased is held at the memorial site.