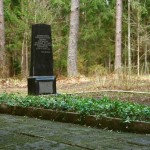 The first murders of Jews in Riebiņi occurred already in July 1941, but extermination of a greater scale took place in 23 August, when a couple of hundred Jews were taken by the local and Malta’s self–defenders to the Aizupieši Forest and shot there.

In 1955 on the site of massacre the families of deceased erected a monument – an obelisk in black granite with an inscription in Russian: “Eternal remembrance to Jews of Riebiņi town, who tragically perished, killed by German fascist occupants on 23 August 1941. Relatives.”