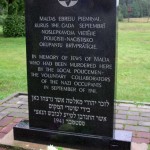 The Nazi troops entered Malta on 4 July 1941 and immediately started extermination of Jews. Part of Malta Jews were shot together with Jews from the vicinity – Silene and Pīgožņi – in the Baldene (Balda) Forest at the end of July, but mass–scale massacres of Malta Jews took place at the end of September, in a basement close to the House of Culture (No. 76 1st of May Street), when approximately 200 Jews were shot.

In 2004 the Council of Jewish Communities of Latvia placed next to the House of Culture, the place, where the Jews, shot in the basement, where taken, a monument in black granite with the Star of David and an inscription in Hebrew, Latvian and English: “In memory of Jews of Malta who had been murdered here by the local policemen – the voluntary collaborators of the Nazi occupants in September of 1941.”