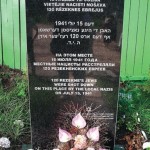 The troops of Nazi Germany entered Rēzekne on 3 July 1941. The first murders of Jews took place already on the following day, when more than ten young people from among the Jews gathered in Rēzekne market square were shot. A week later, for propaganda purposes, a group of Jews were ordered to unearth the victims of the Soviet power, and regular shootings of Jewish inhabitants began, lasting until September 1941. Mass–scale massacre of Jews in the Rēzekne Jewish Cemetery took place in August 1941, when the majority of Rēzekne Jews were killed. Pursuant to the report of 20 June 1942 by Police of Rēzekne District, in total 3219 Jews were killed in Rēzekne. Approximately 120 Jews were killed in Leščinskis’ Garden (before World War II this property was owned by Leščinkis’ family).

In 2006 the Council of Jewish Communities in Latvia erected a monument with an inscription in four languages in this garden.