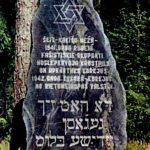 At the beginning of July 1941, mass–scale arrests of Jews started in Krustpils. Initially Jews were driven into the slaughterhouse, but in a couple of days’ time part of the Jews were taken to the Krustpils Sugar Factory on the outskirts of the town and to Jaunā muiža (approximately 4 km from Krustpils), but the remaining – to the premises of the former Jewish School of Krustpils (182 Rīgas Street), which became a provisional ghetto. On 1 August 1941 all imprisoned Jews were shot by a SD unit (“Arājs Commando”), which had arrived from Rīga, together with local self–defenders and policemen in the former shooting–range of Latgale Artillery Regiment of the Latvian Army in Kaķīši peat swamp (5 –6 km from Krustpils).

On 1 August 1941 also the Jews brought from Gostiņi and Pļaviņas were shot in the same place – the Kaķīši Forest, but in 1942 – Jews of the German Reich.

In 1958 the remains of Jews from Krustpils, Pļaviņas and Gostiņi, as well as Western Europe, murdered in the Kaķīši Forest, were reinterred in the Asote Jewish Cemetery. On the site of massacre in the Kaķīši Swamp a monument in black granite was erected, it bears the Star of David and an inscription in Latvian “Here – in Kaķīši Forest – in the autumn of 1941 fascist occupants murdered the Jews of Krustpils and its vicinity; in the summer of 1942 – Jews from the countries of Western Europe”, as well as a phrase in Yiddish “Jewish blood was shed here”.