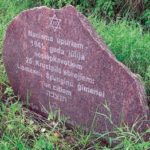 At the beginning of July 1941, mass–scale arrests of Jews started in Krustpils. Initially Jews were driven into the slaughterhouse, but in a couple of days’ time part of the Jews were taken to the Krustpils Sugar Factory on the outskirts of the town and to Jaunā muiža (approximately 4 km from Krustpils), but the remaining – to the premises of the former Jewish School of Krustpils (182 Rīgas Street), which became a provisional ghetto. In the second part of July 5 Jews were selected from the ghetto, later – 20, who were taken to Mantukalns in Spuņģēni Forest and shot there. The remaining Jews were shot on 1 August 1941 by a SD unit (“Arājs Commando”), which had arrived from Rīga, together with local self–defenders and policemen in the former shooting–range of the Latgale Artillery Regiment of the Latvian Army in Kaķīši peat swamp (5–6 km from Krustpils). Some Jews of Krustpils were shot on the highway of Jēkabpils–Rēzekne in the part of the road– turning to Ļamāni, where a gravel pit had been located before the war.

In November 2007 the Council of Jewish Communities of Latvia placed at the site of massacre in Mantukalns a memorial sign with an inscription in Latvian “To Victims of Nazism – 25 Jews from Krustpils murdered in July 1941: Lipmann, the Spungins and others”.