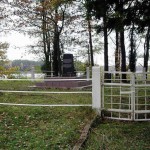 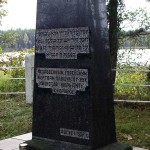 On 21 July 1941 the Jews of Silene (former name Borovka) were arrested and placed into the Grand Synagogue. About 27 July they were taken to the vicinity of the Smilgu (Smiļģiņa) Lake, where a voluntary commando of murderers, formed by members of self–defence units of Silene, Skrudaliena and Saliena, shot the Jews. A number of locals from Silene were attracted for burying the dead.

In 1957, with the support of local residents of Silene, a monument was erected at the Smilgu (Smiļģiņu) Lake with an inscription in Russian and Hebrew: “To the unforgettable Jewish victims, killed by the hands of Nazis, July 1941, in Borovka”.