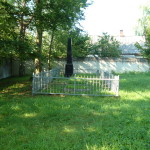 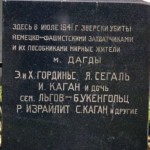 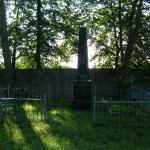 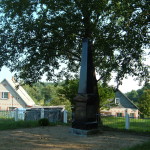 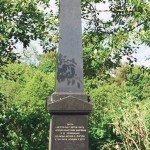 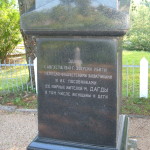 Location of the monument

The Nazi troops occupied Dagda on 28 June 1941. The Jews of Dagda were arrested on 25 July. Initially the arrested Jews were placed in a shed next to the commandant’s office, but later practically all of them were shot at the Dagda Jewish Cemetery and in the Murāni Pine Forest. Part of the Jews from Dagda were transported to the Daugavpils ghetto, however, not all of them reached it, one group of those who were being transported was shot by the local self–defenders on the way, approximately 300 m from Kalna Višķi.

During the Soviet period two monuments were erected in the former Dagda Jewish Cemetery. One of the monuments –an obelisk in black granite – is located within the cemetery and has an inscription in Russian: “Here in July 1941 German–fascist occupants and their accomplices brutally murdered civilians of Dagda settlement E. un H. Gordin, J.Segal, I.Kagan and his daughter, family of Lgov–Bukenholz, R.Israelit, S.Kagan and others”.

Another monument, similar in appearance, was placed outside the cemetery’s fence with an inscription in Russian “Here on 1 August 1941 German–fascist occupants and their accomplices brutally murdered 120 civilians of Dagda settlement, women and children among them”. An inscription in Yiddish is engraved on the reverse side of the monument.