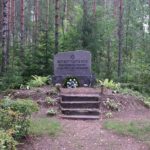 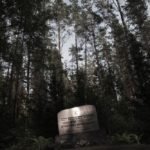 During the Soviet period on the site of massacre at the Cirma Lake a granite stone monument with the Star of David and an inscription in Yiddish, Latvian and Russian: “Eternal Remembrance to the Victims of Fascism, 1941” was erected. The inscription in Yiddish mentions Jews mentioned instead of victims of fascism.