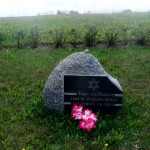 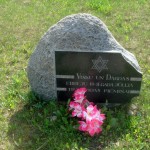 After the Nazi troops entered Višķi, a decree was issued, stating that all Jews of the village had to arrive at the Daugavpils ghetto by 26 July 1941. Those, who due to physical feebleness could not cover the distance to Daugavpils, were shot on 12 and 23 July (exact location is unknown). Some Jews, who attempted to hide, were shot in the Višķi Cemetery.

On 6 October 2011, approximately 300 m from Kalna Višķi, were Jews from Dagda and one Jewish family from Višķi were killed, a memorial stone with the Star of David and an inscription in Latvian “To Commemorate the Tragedy of Višķi and Dagda Jews in July 1941” was erected. The monument was erected thanks to the financial support granted by Višķi parish and Eleonora Petrova’s initiative.