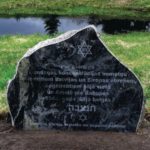 In 1943–1944 several branches of the concentration camp “Kaiswerwald” were located in the vicinity of Dundaga, 6000 Jews from various European countries (including Latvia), as well as approximately 1000 prisoners of war and partisans were imprisoned there. Part of Jews imprisoned in “Dondagen” camp was killed in Puze Forest, not far from the former Parish Council House.

In 2008 the Council of Jewish Communities of Latvia erected on the site of massacre a monument with an inscription in Latvian: “In remembrance of Jews from Latvia and Europe, prisoners of Dundaga concentration camps, killed in this place and in Amele at the Rakupe River at the end of 1941”.