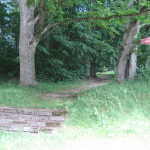 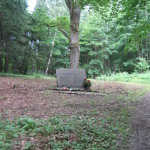 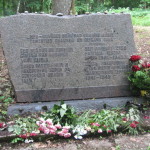 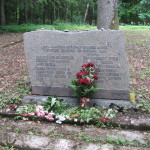 The Nazi troops entered Talsi on 1 July 1941, and immediately imposing restrictions on Jews began – expropriation of property, orders to do hard manual labour, etc. Several Jews, who were considered to be Soviet activists, were immediately arrested and shot. Mass–scale murders of Jews from Talsi and its vicinity was conducted as a number of actions, which were implemented by local self–defenders and the Latvian SD unit “Arājs’ Commando” in July and August in various places, murdering 400 Jews in total. The first action for extermination of Jews took place in a forest of Ķūļciems parish, but the majority of Jews from Talsi were killed in the Sukturi Forest, in the vicinity of former leprosarium. Part of Jews from Talsi town and Stende parish were shot in a forest of Ruņķi village.

In the Soviet period those killed in the Sukturi Forest and the forest of Ķūļciems parish were reinterred in the Sukturi Brethren Cemetery, where a monument was erected, it bears an inscription in Russian and Latvian “Here those, who fought for the Soviet power in 1919, were shot and buried. Here rest 2166 victims of German fascism’s terror. 1941– 1945” and a quote by E. Vēvers “We – the granite wall of mankind’s brotherhood – cemented in mortar of horror and suffering”.