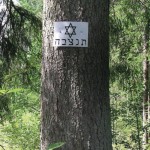 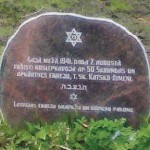 The Jews of Skrunda parish were shot in July 1941 (according to other data – at the beginning od August) in a forest behind the Sumata River.

In 2007 the Council of Jewish Communities of Latvia erected at the Sumata River a commemorative stone with two Stars of David and an inscription in Latvian: “On 7 August 1941 in this forest fascist murdered approximately 50 Jews of Skrunda and its vicinity, including the Katskos.”