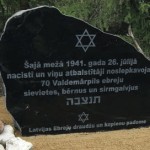 The beginning of July 1941, when the Nazi troops entered Valdemārpils, was the onset of imposing restrictions upon Jews – expropriation, order to wear the yellow circle, etc. Approximately 50–60 Jewish men of the town, who were capable of work, were sent to Mežgravas (approximately 5 km from Valdemārpils) to dig peat, where they were shot on 7 August. The remaining Jews were arrested at the end of July and placed in buildings on Kr. Valdemārs Street, from where on 26 July self–defenders from Talsi took them to a forest near Jaunciems–Kaltene road and shot them (approximately 70 Jews).

In 2008 on the site of murder in the forest at the side of road Jaunciems–Kaltene the Council of Jewish Communities of Latvia erected a monument in black granite with two Stars of David and an inscription in Latvian: “In this forest on 26 July 1941 the Nazis and their supporters murdered 70 Jewish women, children and the elderly from Valdemārpils”.