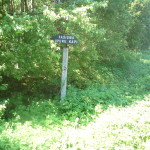 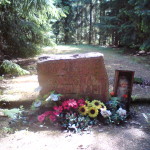 After the Nazi troops entered Pāvilosta in July 1941, arrests of Jews began and a number of restrictions were introduced – all Jews had to move into one building, had to wear the yellow star, do forced labour, etc. Mass–scale murder of Jews from Pāvilosta and its vicinity – Jūrkalne and Saka, took place in December in the Grīņi Nature Reserve (approximately 4 km from Saka). It was carried out by a German SD unit that had arrived from Liepāja with the assistance of local self–defenders. 68–80 Jews were killed in total.

During the Soviet period on the site of murder a small monument in granite with an inscription in Latvian “Graves of Victims of Fascism” was placed.