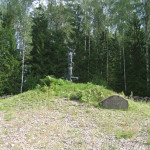 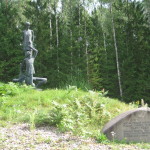 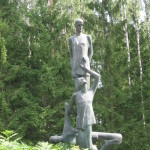 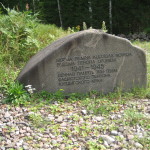 The Nazi troops entered Kuldīga on 1 July 1941. Already on the following day a number of orders were issued that restricted the life of Jews in the town, and a couple of hundred Jews were arrested. Mass murdering of Jews was started in mid–July by a SD unit, with the assistance of the local self–defenders, and continued until the beginning of August in various locations. Four sites, where Jews were shot, are known in Rumba parish (approximately 5–6 km from Kuldīga); however, the exact number of victims and circumstances of murdering are unknown.

In 1988 in Rumba parish on the side of Mežvalde–Ķūķciems road (approximately 3.5 km from the closest site of murder) a monument (sculptor Inta Berga) to all residents of Kuldīga killed during the Nazi occupation was erected. It bears an inscription in Latvian and Russian “Eternal Remembrance to the Victims of Fascist Terror from Kuldīga Municipality 1941–1945”.