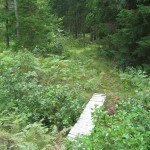 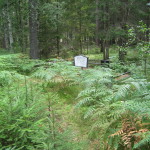 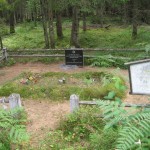 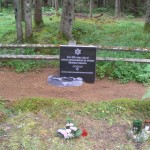 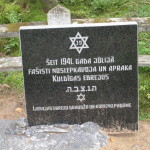 The Nazi troops entered Kuldīga on 1 July 1941. Already on the following day a number of orders were issued that restricted the life of Jews in the town, and a couple of hundred Jews were arrested. Mass murdering of Jews was started in mid–July by a SD unit, with the assistance of the local self–defenders, and continued until the beginning of August in various locations. Four sites, where Jews were shot, are known in Rumba parish; however, the exact number of victims and circumstances of murdering are unknown.

During the Soviet period in one of the sites of murder in a forest of Rumba parish (approximately 7 km from Kuldīga) a wooden memorial plaque was erected; however, the inscription on it is no longer legible. In 2006 the Council of Jewish Communities of Latvia erected next to the plaque a monument in black granite with an inscription in Latvian: “Here in July 1941 fascists murdered and buried the Jews of Kuldīga”.