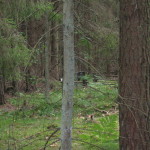 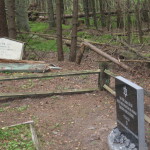 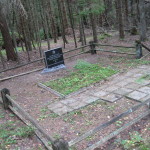 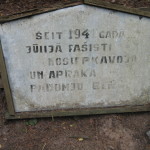 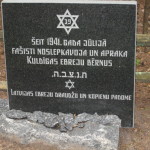 The Nazi troops entered Kuldīga on 1 July 1941. Already on the following day a number of orders were issued that restricted the life of Jews in the town, and a couple of hundred Jews were arrested. Mass murdering of Jews was started in mid–July by a SD unit, with the assistance of the local self–defenders, and continued until the beginning of August in various locations. Two sites, where Jews were shot in a forest of Padure parish, not far from “Old School” (approximately 3–4 kilometres from Kuldīga) are know; however, the exact number of victims and circumstances of murder are unknown.

During the Soviet period one of the sites of shooting in the forest not far from “Old School” was fenced off and a wooden memorial plaque with an inscription “Here on July 1941 fascists murdered and buried Soviet children” was placed. In 2007 the Council of Jewish Communities of Latvia replaced the plaque placed in the Soviet period by a monument in granite with two Stars of David engraved on it and an inscription in Latvian: “Here in July 1941 fascists murdered and buried Jewish children from Kuldīga”.