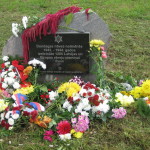 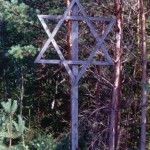 In 1943–1944 several branches of the concentration camp “Kaiswerwald” were located in the vicinity of Dundaga, 6000 Jews from various European countries (including Latvia), as well as approximately 1000 prisoners of war and partisans were imprisoned there. Many prisoners were executed and died because of poor living conditions.

Part of those who died in the branches of the concentration camp were buried in Čiekuri, which, according to some testimonies, is also the site, where a group of Jews, who were building the narrow–gauge railway in the direction of Mazirbe, were killed.

In June 1992, thanks to the initiative of local historian Jautrīte Freimute, residents of Dundaga placed a large Star of David, made in wood, on the site, where Jews were killed and reinterred. In October 2007 the Council of Jewish Communities of Latvia unveiled next to it a memorial stone with two Stars of David and an inscription in Latvian: “To commemorate 1200 Jews of Latvia and Europe exterminated in the death camps of Dundaga in 1943–1944”. The unveiling of the monument was attended by representatives from the Council of Jewish Communities in Latvia, the government and the local government, as well as from the Embassies of Germany, Israel, Slovakia, the Czech Republic, Austria and Hungary.