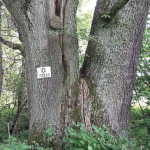 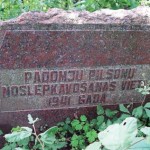 The circumstances, in which the Jews living in the vicinity of Aizpute (Apriķi, Kazdanga, Kalvene, etc.) were killed, are not clearly known. Possibly, part of them were killed in the summer of 1941 together with “Soviet activists” in a forest of Kazdanga parish, not far from the care home “Rokaiži”.

During the Soviet period on the site of murder at the care home “Rokaiži” a monument with an inscription in Latvian “The site where Soviet citizens were murdered in 1941” was erected. At present a symbolic memorial sign with the Star of David has been placed on one of the trees.