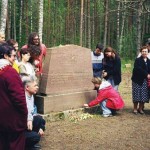 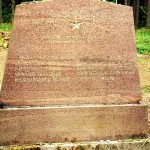 At the beginning of July 1941, when the German army entered Tukums, Jews were ordered to gather in the synagogue of the town in Elizabetes Street, which became the place, where Jews stayed until the action started. In Tukums murdering of Jews began approximately in mid–July, when people in groups of 20 were brought in trucks to the selected site of massacre – a forest in the vicinity of the Valgums Lake, where a commando of murderers, set up by the local self–defence unit, shot them.

After World War II, in the mid–1950s, Jews erected a monument with an inscription in Latvian and Russian in the place of massacre. Levi Lichtenstein, the Rabbi of Tukums, who was identified among the remains of the deceased, was reinterred in the Tukums Jewish Cemetery.