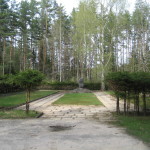 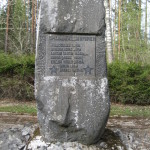 The troops of Nazi Germany entered Valmiera on 5 July 1941, and already a couple of days later arrests of Jews started. In mid–July also the Jews that had been arrested in parishes of the district were brought to Valmiera. The course of the Holocaust in Valmiera is not clearly known. The Jews of Valmiera and its vicinity were murdered in a number of actions in July and August in the former shooting range in Ķelderleja (approximately 4 km from Valmiera), in the vicinity of the Valmiermuiža Prison and in the Iršuparks Forest (approximately 1 km from Valmiera). In the spring of 1942 also 30 Jews from Ukraine were shot behind the building of Valmiera Parish Council House. The shootings were carried out by a German SD unit (“Arājs’ Commando”) together with local policemen.

In 1948 a monument (stone mason E. Koncis) was unveiled on the site of murder in Ķelderleja, dedicated to all victims killed on this site (approximately 3000 residents of Valmiera). The monument is in the shape of a grey granite stele with an inscription in Latvian “To Victims of Fascism of 1941” and a poem “Bitter, chaff filled bread/ Sea of bloodied sweat/ Oppressed the Latvia people / Multitudes of workers/ On a black day of suffering/ Cut a ?/ For the day of the Sun”.