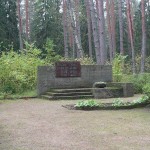 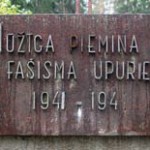 When the Nazi occupation of Strenči began in August 1941, the Jews living in the town (approximately 9 in total) were shot in a forest close to Valka Street. Slightly later the Jews, who were patients of the Strenči Psychiatric Neurological Hospital and employees (approximately 20 persons), were shot separately at the Gauja River.

In 1960 the Jews killed in the forest near Valka Street and at the Gauja River together with other victims from the Strenči Psychiatric Neurological Hospital were reinterred in a cemetery of victims of fascism, where a monument with an inscription in Latvian “Eternal Remembrance to the Victims of Fascism. 1941–1944” was erected, as well as concrete plaques with the names and surnames of the deceased (the plaques have not been preserved to the present day) were placed.