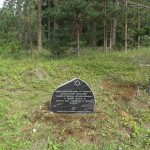 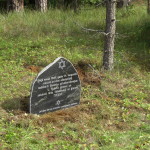 When the Nazi occupation of Strenči began in August 1941, the Jews living in the town (approximately 9 in total) were shot in a forest close to Valkas Street. Slightly later the Jews, who were patients of Strenči Psychiatric Neurological Hospital and employees (approximately 20 persons), were shot separately at the Gauja River.

In 2008 at the site of murder in the forest close to Valkas Street the Council of Jewish Communities of Latvia erected a memorial stone with an inscription in Latvian: “On 11 August 1941 in this forest the Nazis and their supporters shot 9 Jews from Strenči town: the family of L. Schubitz and dentist Gita Tafelstein with her family”.