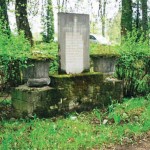 The Nazi troops occupied Rūjiena on 9 July 1941, and immediately restrictions were imposed upon Jews – men capable of work were arrested and imprisoned in premises of the former police precinct (5 Raiņa Stret), from where they were taken to do forced labour, but other Jews were ordered to wear the yellow star and their freedom of movement was restricted. The first action of murdering Jews took place in mid–July – a separate group of Jews was taken together with Soviet activists close to Oleri in Jeri parish (approximately 11 km from Rūjiena) and were shot on the edge of a forest. The second action of murdering Jews took place at the end of September, when all remaining Jews were taken to the Bodnieki Forest in Naukšēni parish and were shot. Both campaigns were lead by the local police force; approximately 50 Jews of Rūjiena in total were killed.

In the 1960s the murdered Jews of Rūjiena together with other victims were reinterred in the Bērtuļa Graveyard, where a stele in grey stone was erected, it has a concrete pedestal with an inscription in Latvian “Here rest Soviet activists killed in 1941 by the German fascists”, and a list of the names of 11 victims, among them 1 is noted as being “unknown”.